We launched Mesh as a limited production run.
Mesh is currently sold out 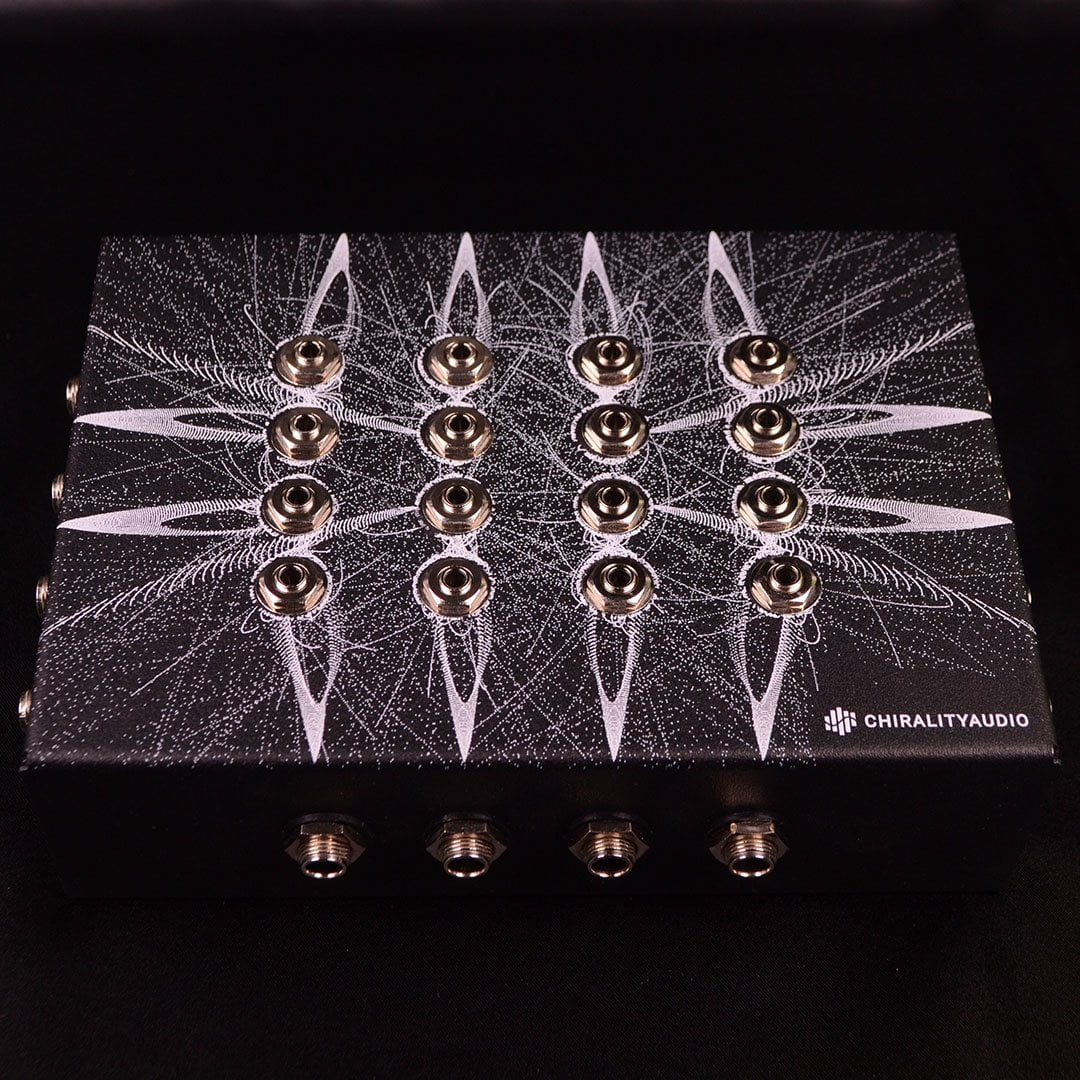 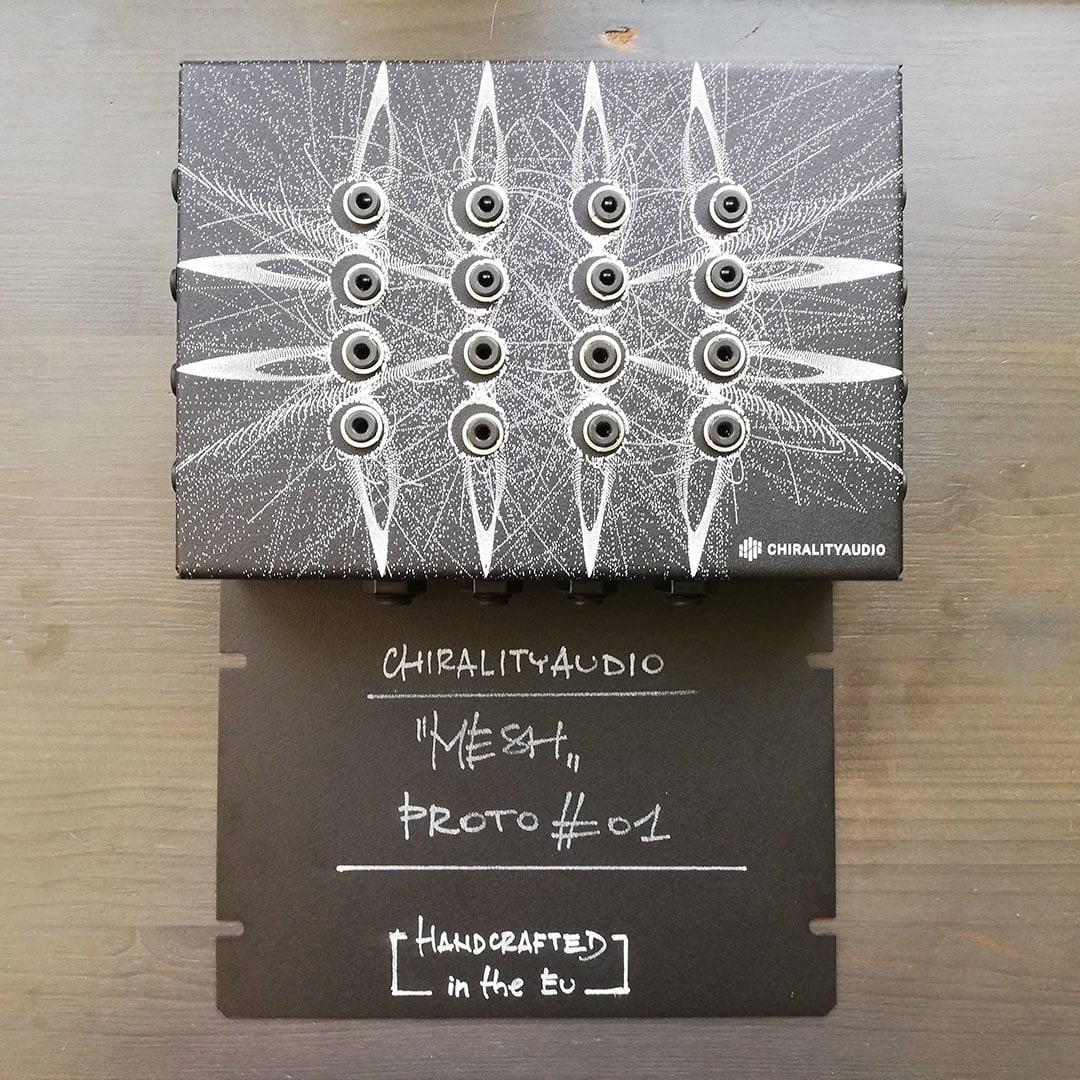 Mesh is a passive tabletop patchbay: 16 independent channels (unbalanced stereo, balanced mono, or unbalanced mono) with 16 non-normal patchpoint connections in a super sturdy steel enclosure. You can use Mesh to simply route your machines to your FX pedals or to quickly and effectively rearrange and experiment with the order of your FX chain and/or devices, leaving infinite space to your creativity and sound exploration!

It’s a passive design, so you don’t have to worry about power supplies and you can route whichever signal you want, as long as you guarantee source and destination are compatible! We opted for a rectangular format trying to keep user operations highly ergonomic yet in a as compact as possible enclosure.

Like all our products, Mesh front panel features one of our signature generative art designs. It means that we did not draw it. We created a small system with some simple rules and a few hundred particles, and left it evolve and regenerate itself until we got something we liked. Absolutely unnecessary, hauntingly fascinating! In Mesh the trajectory of the particles illustrates the connection between the I/O jacks on the side and the patch point jacks on the top.

Mesh enclosure is factory drilled and features a professional high quality printing on top (the same printing method we use for all our products). Mesh is handmade with love and painstaking care by us using high quality Neutrik 6.35 mm jacks for Input/Output connections and genuine Cliff Electronic 3.5 mm jacks for insert points connections. That’s how we do it!

Some history behind the project

Mesh was born in 2016 as a “no name” personal project for Nico, our product engineer, without the intention of releasing it to the public.

While chatting with the electronic music composer and performer Hainbach we mentioned this patchbay was lurking in the lab. Since he showed interest towards the idea, we decided to pull the project off the shelf, give it our signature generative art design – which in Mesh also indicates the signal flow – and built a prototype we sent over to him!

After the first pictures of the prototype appeared on social media, we received lots of positive reactions and email inquiries. At the end of 2020, we organized a pre-order campaign to build a small batch of units. This allowed us to reach the minimum order quantity requested by the enclosure manufacturer for drilling customizations and plan a product launch without too many unknowns (especially helpful during the pandemic!).

We did not choose one of the popular crowdfunding platforms for the campaign as these charge substantial fees which would have eat up our already thin margins. We wanted to keep the campaign intimate and simple, so we followed the DIY route.

In January 2021 we discovered there is a number of people out there who cares about us: the pre-order campaign was successfully funded!

All the units bought through the pre-order campaign have been shipped by now.

We have parts to build another couple of units. Order yours now!

Please note that the unit shown in Hainbach’s videos is a prototype unit drilled by hand, that’s why there are some inconsistencies over the holes alignment. The units released are factory drilled and everything looks tidy and professional! 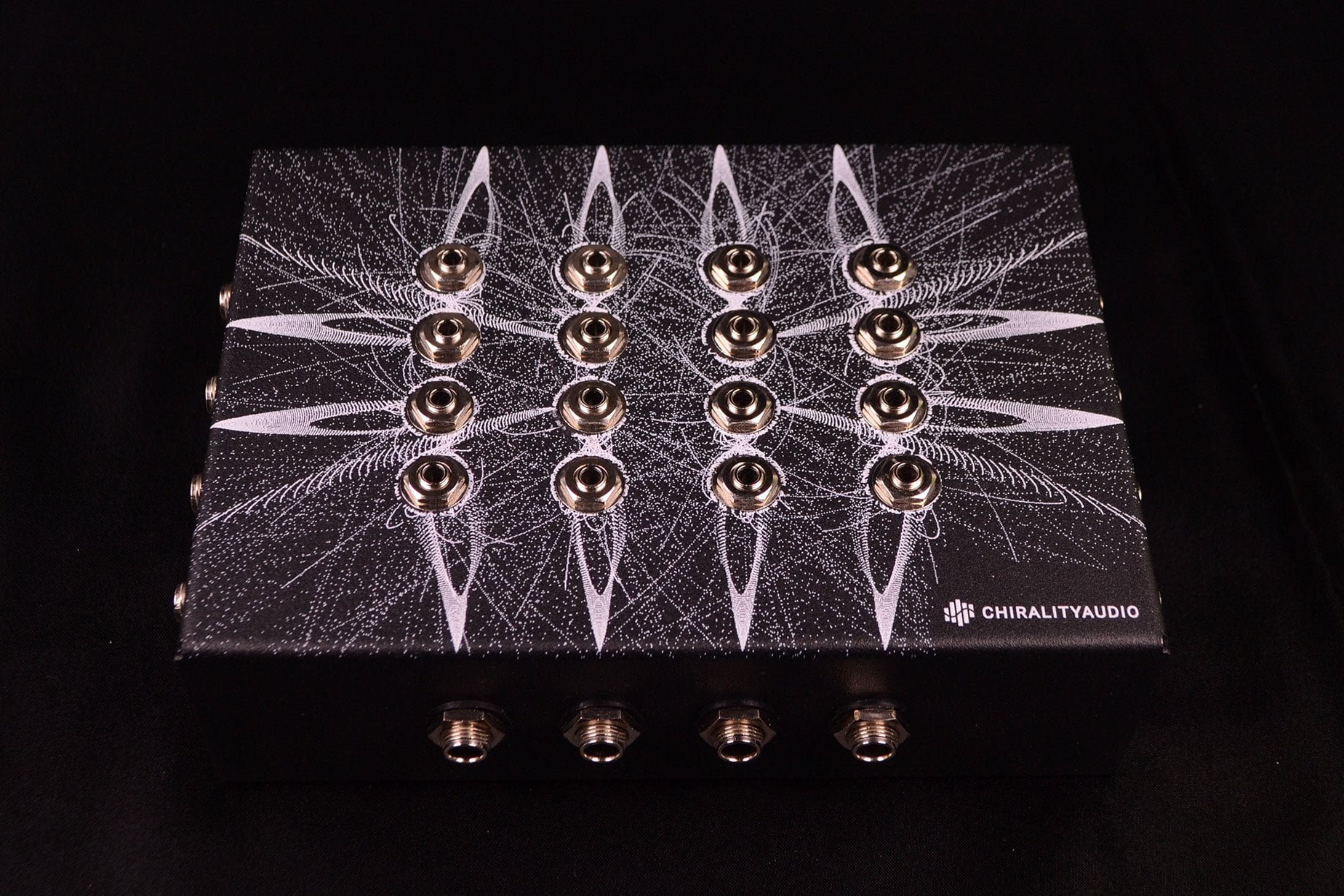